Lebanon: There are no Drums without War 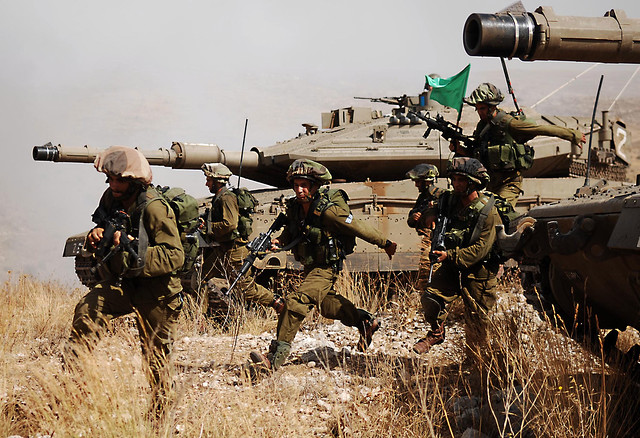 During the last weeks, the city of Tripoli has become the scenario of confrontation between Sunnis and Alawis, this is, between those who support the Syrian revolts and those who support Bashar al Assad’s regime. When everything seemed to indicate that sectarianism would be the most probable factor of instability in Lebanon, a new rhetoric escalation from Israeli armed forces has contradicted all forecasts. Since 2006, the shadow of a new war episode has been present in strategic plans; however now, given the Syrian crisis, Israel and Hezbollah are ready to show the international community that they are willing to start the third war in Lebanon.

The operative ability of Hezbollah has notably increased during the last five year period. Images on Google Earth reveal the existence of infrastructures built since 2006 on strategic areas: the mountains of the Beqaa valley –along the border with Syria– and the vicinity of Yasin, city with the main bastions of resistance against Israel. Although the nature of these installations is being discussed, intelligence analysts state that they could be training camps for a very specific use –although they do not dismiss the idea that it may be a trick manoeuvre.

As well as any conjecture, the expansion of the ballistic potential of the organization headed by Nasrallah is greatest worry for the Israeli Staff. As he stated for the Iranian television Al Alam, the current military capacity is far from the one of the last conflict. The new arsenal consists of, among other weapons, anti-aircraft missile systems S-300 which are capable of reducing the superiority of the Israeli air forces. Moreover, according to the Lebanese newspaper The Daily Star, the Syrian regime could be hiding Scud missiles in Lebanon under the protection of Hezbollah, fearing that the Free Syrian Army could take part of its most sophisticated weapons. If so, Israel’s security would be seriously jeopardized. Mentioned missiles possess a range of up to 700 km, which implies that if they were to be launched from the north of Lebanon, they could reach vital objectives inside Israel. Therefore, the Shiite party-militia would have trespassed one of the red lines that Tel Aviv does not seem to be willing to tolerate.

The Israeli Government wants to avoid at all costs the mistakes made during the second war in Lebanon; precisely underestimating the arms preparation and potential of Hezbollah was its main strategic error in 2006. Since then, the drilling of its army –as well as of the civil population– has constituted one of the priorities in the Defence Ministry’s agenda. Tel Aviv is aware of the challenges posed by the new regional scenario. Taking advantage of the fact that Syria is slowly bleeding, Israeli Defence Forces are preparing for the third war in Lebanon. A conflict that can break out in any moment and that can lead to an unprecedented increase in violence, according to the statement of a high standing Israeli official for the newspaper Haaretz.

Taking into account the current Syrian crisis, Tel Aviv’s determination can be reinforced by the difficulty posed for Bashar al Assad’s regime by the support towards its Shiite allies in the neighbouring country. This is coupled with the same vulnerability of Hezbollah which is incapable of exercising a complete control on its operational setting. Sign of this is this week’s discovery of Israeli espionage systems in its private communication network to the north of the Litani River in the localities of Srariya and Rsay.

At the same time as it increased its military capacity, Hezbollah seems to be partially squandering the prestige worked on since its foundation in 1982 in order to fight against the Israeli occupation of Lebanon. Its role as symbol of Shii